As described by the NIH:

The purpose of the Predoctoral to Postdoctoral Fellow Transition Award (F99/K00) is to encourage and retain outstanding graduate students who have demonstrated potential and interest in pursuing careers as independent researchers. The award will facilitate the transition of talented graduate students into successful research postdoctoral appointments. 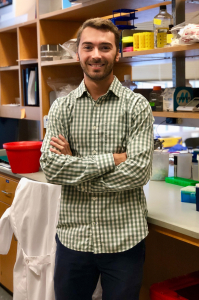 Shaun, a PhD candidate in Cancer Biology and previous T32 Predoctoral Fellow, is conducting his thesis research in the lab of Dr. Brian Capell. Here he studies the functional roles of epigenetic modifiers the skin homeostasis and cancer development. Under Dr. Capell’s mentorship, Shaun previously demonstrated that the histone demethylase LSD1 (KDM1A) regulates epidermal differentiation by repressing master epithelial transcription factors (Egolf et al., 2019). More recently Shaun has focused his studies on Mll4 (KMT2D) a histone methyltransferase that is one of the most frequently mutated genes in human cancer. His research identified a key role for Mll4 in mediating epidermal differentiation and tumor suppression through a process called ferroptosis (Egolf et al., 2021). This work was also recently highlighted in Penn Medicine News and Penn Today.

According to Shaun’s Mentor, Dr. Brian Capell, “Shaun has made an important discovery regarding the role of an epigenetic enzyme and its role in a tumor suppressive process known as ferroptosis. We are excited that Shaun has been recognized or his accomplishments, and awarded further funding from the National Cancer Institute (F99-K00).”

Shaun’s K99/F00 proposal expands on these findings to elucidate the functional significance of these epigenic modifiers in oral epithelia and in the development and progression of head and neck squamous cell carcinomas (HNSCC). As Mll4 and LSD1 have opposing effects on histone targets, Shaun hypothesizes that the effects induced by the loss of Mll4 may be reversed with inhibition of LSD1.

During the K99 phase of his award, Shaun will investigate the therapeutic potential of LSD1 inhibitors in head and neck squamous cell carcinomas (HNSCC) under Dr. Capell. For the K00 period, Shaun will pursue additional training in tumor immunology to realize his long-term goals of identifying the significance of epigenetic changes on immune cell response to cancer and determining how to these mechanisms can be leveraged to improve immunotherapy treatments. 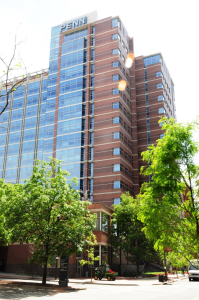